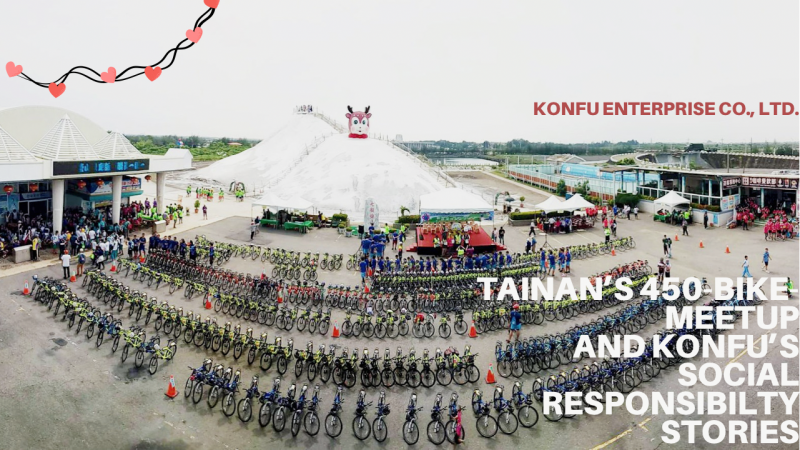 We’d like to share some stories about Konfu’s connection with Tainan, the oldest city in Southern Taiwan.

13 years ago, Konfu’s founder, Char-Fu Shea read in a newspaper that Zuojhen junior high school was raising funds for students who were not able to afford school lunch. The school is located in remote area of Tainan and half of the students are in need of financial support. Caring about students in his hometown, Mr. Shea visited then-principal Mr. Ching-Wang Hu and ended up donating approximately USD 150,000 to improve the school's operation.

9 years ago, Mr. Hu retired from the school. Mr. Shea invited Mr. Hu to dedicate his retired life to charitable events. Mr. Shea took the lead and donated USD 350,000 to establish a foundation named after his father, Chuan-Cheng. Ever since, Konfu has regularly participated in charity events. They have learned a lot when accompanying the students.

In 2018 summer, the Chuan-Cheng foundation donated 40 bikes to another junior high school in Tainan. 16 students in Beimen schools successfully spent 7 days riding bicycles around Taiwan island, a total distance of 717km. Before the event, the students spent over 5 months strength training and learning bike repair skills, which is a special lesson for students in Asia’s crowded education system.

In the summer of 2019, the Chuan-Cheng foundation held a bicycle meetup in Tainan’s well-known tourist spot Salt Mountain. Students from 17 schools in Tainan gathered with their 420 bikes donated by the foundation. It was a meaningful moment for both the schools and Mr. Shea himself. He regarded education as the most important thing for disadvantaged students to change their lives. And Konfu is practicing its social responsibility as Mr. Shea believes “Success means benefits to the world.”

We hope you enjoyed these stories and wish you a great beginning to the new year.

*You must have Skype already installed on your devices